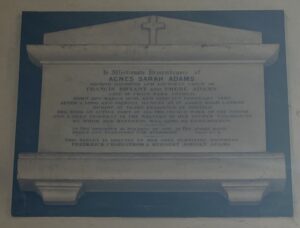 The monument to Agnes Adams records that she had suffered from ‘a painful illness’ for ‘a long time’.

Recording on monuments that the deceased had suffered from an illness is not unusual, especially on monuments to women. These tend, however, to refer to illnesses connected to childbirth or express the husband’s gratitude and awe at how his wife’s virtue has been expressed through her ‘patient suffering’.

Interestingly, in Sarah’s epitaph, there is a complete absence of this more typical framing of the female voice in terms of marriage and/or motherhood. The framing of Sarah is as the youngest child of two parents – not the daughter of a notable father whom her mother married, but the child of ‘her father and her mother’. This expresses the new formulation of the nuclear family that emerged towards the end of the 19th century, which sees the children as firmly part of the family unit, in contrast to the original turn towards the nuclear family in the 17th century, that focused more on the relationship between the husband and wife.

Agnes’ epitaph does not tell us what her long and painful illness was. But there is a potential clue in the legacies Sarah left in her will and the line in her epitaph that she left the family home of Chase Park, Enfield, to spend the latter days of her life in Abbey Road, which is very close to the site of the London Chest Hospital, in St John’s Wood.

The London Chest Hospital was one of two hospitals Sarah left legacies to in her will. The other was, The Cancer Hospital, London. The former hospital, which was amalgamated into St Bartholomew’s Hospital in 1994, specialised in treating ‘diseases of the heart and lung, particularly tuberculosis’. The latter hospital, now the Royal Marsden, specialised in treating cancerous tumours.

The final lines of Agnes’ epitaph highlight her involvement with St Andrews and, specifically, her ‘…deep interest in the welfare of her poorer neighbours.’ Again, this reflects a late 19th century take on an older tradition. In this instance, the older tradition of the wealthy articulating their gentility through acts of charity.

By the late 19th century, however, the fashion was for simple and truthful epitaphs that listed the deceased’ name and date of death alongside, perhaps, a verse from scripture, as is included here. ‘Only in rare cases was anything more needed… “if the departed had shone out like a bright a burning light” it was” a duty to outline the salient points of character, so that others, seeing their good works, may glorify our Father which is in heaven”. By including Agnes’ involvement with St Andrews and her concern for the poor of the parish, the epitaph, therefore, gives an even greater emphasis to this aspect of Agnes’ character then might first be realised and if the bar for inclusion of a character trait was a lot higher than it had ever previously been so, therefore, was the risk of ridicule, if the truth of the matter was considered otherwise. We can, therefore, be reasonably certain, that Sarah was seen in her day to take a great interest in her poorer neighbours and ‘…her kindness [was] long remembered [by them].’.

At the same time, we are told that the monument was commissioned by Agnes’ ‘only surviving brothers’ and we are therefore alert to their role in the composition of the piece.

There is always a level of critical doubt regarding the accuracy of an epitaph, as an epitaph requires the writer to sum someone up in a few sentences, which gives very little room for the writer to articulate the nuances of human character. This remains true even when, as here, the ‘truth’ of what is written, can be believed with some certainty, due to the culture in which it was written.

This issue is further compounded when the people commissioning the monument are close relatives whom, we can surmise, would want to use the few words available to focus on the deceased’ best traits – as understood by their family culture, if not the wider culture. This selectivity in the description of the deceased, does not, in and off itself, alter the truth of what is written, but, in an age, such as the late 19th century, where truth and good character are primary values, memorialization, ironically, can askew the truth by its ‘form’, even when its content is historically correct.