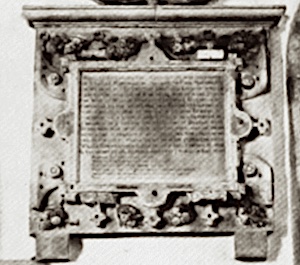 Erected in 1609 by William Fowkes, the monument is one of several in St. Andrew’s to women, the majority of which commemorate women who have died in childbirth.

Unusually, this monument memorialises two women: William Fowke’s wife Anne and Anne’s mother, Bridget Harrington. The epitaph on the monument follows the practice of the time in framing both women in terms of their husbands. But compared to other monuments, this framing is very much in the background.

Indeed, while the epitaph includes the more formal conventions of providing each women’s name, their date of death, and the name and status of their husbands, much more space and weight is given to the more emotionally charged declaration of both women’s virtues and William’s grief at Anne’s death during the birth of their ninth child. Furthermore, while it is not stated here, other documents suggest that this ninth child died either during or before birth, which emphasises the emotional intent in what otherwise is simply a factual statement that Anne was mother to nine children.

William’s grief at the loss of his wife is only intensified by the declaration that he commissioned the monument out of his affection for her. What is more problematic for a 21st-century observer is that this deceleration of affection is voiced equally for his mother-in-law. In fact, we can note that William is careful to affirm his wife and mother-in-law equally, throughout. In the early 17th-century, the notion of the nuclear family was still very new and while it was much more bounded than the open medieval families concept of kin and lineage, it was yet to form into the modern, closed, conjugal family that we understand today. Accordingly, the emotional ties that arise from the lived experience of a closed nuclear family were not as fixed as they are today and, indeed, could differ between families. In this instance, the inclusion of Anne’s mother within William’s concept of his nuclear family was likely to have formed because Anne was Bridget’s only child.

This shift towards a nuclear family, and the specific emotional ties this gave rise to, was strongly influenced by the newly appropriated Protestant view of the home as the primary place where God’s people should manifest their Godly character. This contrasted with the prominent view in the Middle Ages of chastity as the principal place of God’s favour which was itself caught up in notions of the secular (or ordinary) life being less than Holy. In William’s time however, the new Protestant focus on the family home not only raised the status of ordinary life to new godly heights but, very quickly, caused people to become extremely exercised about what constituted right relationships between and within all members of the family. One outcome of this was the emphasis put on a women’s role as a mother which was therefore, in and of itself, a manifestation of female religious virtue. This is seen on this monument in the interconnection between the affirmation of Anne and Bridget’s adherence to unspecified Christian virtues and a hope in their resurrection to heaven in the last days as faithful servants of God.

Several contemporary monuments within St Andrews, such as those to Elizabeth Greene and Martha Palmere, give voice to this more intimate and emotional view of motherhood. What the monument to Bridget and Anne exemplifies is the extent to which this newly formed view of ‘the mother’ was complicated by the very real dangers of childbirth. The interplay between the emerging view of a women’s role as a wife and a wife’s virtue being caught up in their role as a mother, meant that the inherent danger of childbirth was much more keenly felt than before. This led to an increased popularity and widespread circulation of early midwifery texts that provided advice on how to minimise these risks. But it also gave rise to a specific adoration of women who their contemporaries strongly felt had, in the name of Christian duty, not only faced up to the perils of childbirth but had paid the ultimate price in doing so.