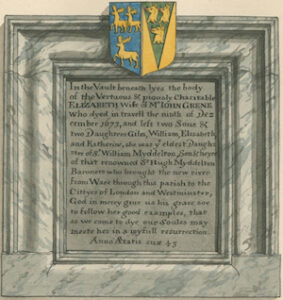 The heraldry on Elizabeth’s monument represents her marriage to John Greene (Grene).

Elizabeth’s family arms are shown on what is, in heraldic terms, the less important ‘sinister’ side – as was the tradition. The text similarly frames Elizabeth in the culturally normative terms of her husband and, most notably, her famous grandfather, whose achievements fill over a quarter of the text.

However, it is the claims of Elizabeth’s virtuous example while alive, and participation in a joyful resurrection now dead, which the observer is encouraged to make their own. Unlike other monuments of the period that we see in St Andrews, the key message of Elizabeth’s is not the social standing of her family but an encouragement to the living as they face the very present reality of death.

Elizabeth’s epitaph is rooted in a particular and multi-layered 17th-century Christian understanding of the relationship between virtuous living and resurrection of the dead. Taken at face value, the epitaph instructs the reader to pay close attention to how we act today, as tomorrow may be taken from us. However, the 17th-century reader would not have understood this in terms of ‘make the most of today’ or ‘be good and you will get to Heaven’. They would have understood virtuous behaviour as evidence of God’s calling on their life and, therefore, an assurance of their own resurrection. To a contemporary Protestant audience, Elizabeth’s epitaph would have been understood as a call to persevere; to not lose hope but to maintain hope in God’s promises of eternal life. It would have been experienced as a truth that alleviated grief and diminished the fear of death.

Elizabeth’s monument can also be contrasted with the earlier monument to Lady Jocosa. The key message of Jocosa’s memorial is that she was a woman of noble lineage and had claim to a great inheritance. The portrayal of Elizabeth’s still includes reference to her lineage, but its inclusion is to frame Elizabeth in a culturally relevant manner, rather than being the purpose of the piece. The main purpose of Elizabeth’s monument is more elusive, as it focuses on her death in childbirth.

The language used, and the plainness of the monument itself, is decidedly understated compared to the contemporaneous example of others. Yet, framed as it is in the somewhat idealistic terms of Elizabeth as a virtuous and exemplary wife and mother whose death ‘left’ four named children, the monument still communicates a much more intimate and personal grief than the functional character of the monument to Lady Jocosa. The emotion may not be foregrounded to the extent that we would expect living within 21st-century Western culture. But its contrast with previous centuries is stark. Rather than purposefully memorialising Elizabeth in a manner that would perpetuate and strengthen a family dynasty for generations to come, Elizabeth is remembered in terms of the impact her untimely death had on others, most notably her immediate family.