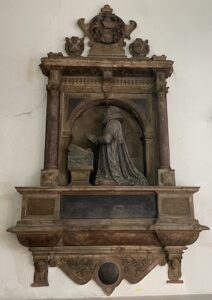 Francis Evington was born in 1548 in Houghton on the Hill, Leicestershire.

We know very little of his birth family, other than that his older brother Richard eventually settled in Halstead. This is 50 miles to the north of Casewick Hall, Lincolnshire, which Francis Evington purchased in or around 1596.

The fact that the Evington name does not show up in the records for Houghton on the Hill, and that the Evington pedigree starts with the Francis Evington of this monument, strongly suggests that (as with several others memorialised in St Andrew’s of this time) Francis had moved to London with very little, if any, inherited wealth.

Evington made his money as a merchant in the City of London. He was one of the original 250 stockholders of the newly formed East India Company. Whilst the company was yet to make the fortunes through which it would become infamous, it nonetheless proved a very profitable return for Evington and his fellow investors.

The style and tone of Evington’s monument proclaims this wealth in no uncertain terms. Resplendent in his merchant robes, Francis is portrayed kneeling at a prayer desk underneath an elaborate arch, supported by Corinthian columns and above which are three coat of arms.

The colours of both the marble and the painted scene have faded with the years. But when the monument was first constructed, it would have been a kaleidoscope of blues, reds, golds, greens, and purples.

That Francis’ wealth not only made him rich but also enabled him to enter the upper echelons of society, is evident in his marriage to Margert Napier, daughter of Alexander (Sandy) Napier of Exeter and London, who was brother to Sir Archibald Napier, Master of the Scottish Mint and Seventh Laird of Merchiston.

The status of the Evington family obtained through Francis’ activities as a merchant provided the opportunity for his son John (whose full title was John Evington of Enfield and of King’s Walden and Sutton county Bedfordshire) to marry the heiress Dorothy Forth. She was the granddaughter of Robert Forth esq, Clerk of the Privy Seal to Henry VIII. In 1644, John and Dorothy Evington were living in Fortescue Hall, a large timber framed house on the site of what is now Fortescue Villas, 13 and 15 Gentleman’s Row. John Evington is also recorded in the mid 1600s as one of eight Middlesex gentry resident in Enfield.

Francis’ two daughters also leveraged the newly found status of their family to advance their prospects by marrying ‘well’. The eldest, Frances, married twice; first to Thomas Harding Citizen and merchant Tailor of London and, second, to Edward Barber of Sutton Court, Somerset. The younger daughter, Elizabeth, married Sir Thomas Rotherham of Bedfordshire, the descendant of Thomas Rotherham, Archbishop of York and Lord Chancellor of England.

We cannot be certain how the family prospered. The daughters may well have prospered from their own marriages. But we know that Francis’ second son, Sir James Evington, was required to sell the newly acquired family manor of Casewick in 1621 due to significant financial difficulties. Whilst we may never know the full story of James’ descendants, we know that, by 1824, the Evingtons who remained in Enfield no longer owned Fortescue Villas but were described as living in ‘indifferent circumstances.’