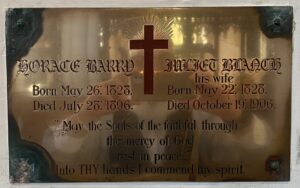 The epitaph to Horace Barry and his wife Juliet, reflects the plain style of the Victorian era. ‘As a rule, a simple record of birth and death of the departed, and a brief text of scripture, suggestive of hope and of the Saviours all sufficiency, and of the need of watchfulness, would most fitly express all that should be said’.

In this instance, it is the ‘resurrection cross’ which points most clearly to the sufficiency of the Saviour, while the quotation comes not from scripture, but from the Catholic liturgy for the dead.

In contrast to older monuments in St Andrew’s, the plain style of the monument tells us little about Horace’s family, but other records suggest that Horace’s immediate family were Protestant – the most notable being Horace’s uncle, Sir Charles Barry, Architect, who built the new Houses of Parliament.  It is likely, therefore, that the phrase in Horace’s epitaph, while from the Catholic liturgy, was chosen from a ‘…standard texts, available from funeral directors, clergymen, and stonemasons, who provided the bereaved with a selection of appropriate sentiments.’

Reflecting the changing fashions, Horace and his family do not attempt to present themselves as of the nobility, even though Horace’s ancestors flourished within the city. Sir Charles Barry’s son entered the family into Burke’s Family Records of the junior houses of British nobility, and Horace himself made a vast fortune. These were changing times and the new middle class of businessmen, bankers and investors, of which Horace was one, were starting to gain a secure identity of their own.

Other records tell us that Horace’s family were originally farmers from Fordingbridge near Salisbury who in time, become yeomen of some means. Among Horace’s descendants is a Mayor of Salisbury – Walter Barry, 1670 to 1722 – and a vicar of Nether Wallop and West Alvington in Devonshire – The Reverend Francis Barry, 1697 to 1734. Rev Barry’s son, Horace’s great grandfather, came to London and flourished as a Clockmaker. His son, Horace’s grandfather, was also apprenticed in the city and flourished as a stationer to The Government Stationary Office.

Horace’s father by contrast, took up as a Stockbroker, a profession which Horace also entered when he came of age. Unlike the City Guilds, there was no apprenticeship to become a stockbroker, but for the stock exchange to work effectively, it was critical that newcomers could be trusted and all applicants had to provide three names of stockbrokers who would each stand a sultry of £750 for them.

Accordingly, it was not uncommon to follow family into the exchange and by all accounts Horace was very successful – on his death, Horace’s estate was worth £182,000 or, £15,000,000 in today’s money. A large part of that estate was Bush Hill House, Winchmore Hill, which Horace had brought sometime before his 42nd birthday.

Bush Hill House was originally built by Sir Hugh Myddelton, who established the New River Company and Horace lived at Bush Hill not as the Lord of the manor, but as an upper middle-class gentleman.

A key characteristic of this Middle-Class lifestyle was Horace’s active engagement as a Justice of the Peace, but it can also be seen in the brass memorial to Horace and Juliet’s daughter Maud.

Maud’s memorial is in the same style as her parents, except for the epitaph, which frames Maude in terms both ideal and vulnerable through its use of ‘light’, ‘angels’ and ‘flowers’ imagery. This attitude towards adult women was characteristic of a Victorian middle-class perspective that expected (respectful) young ladies and adult women to be “…innocent and childlike (in fact, both women and children occupied the same legal status in Victorian England as non-competent dependents) and this meant being in large part ignorant of the “brutal” sphere of public life (work, commerce, people from outside one’s own genteel class).’

The memorials to the Barry family, and especially the memorial to Maude, presents a highly constructed vision of social and family relations, just as much as the older monuments in St Andrew’s. The difference is the ideal they choose to represent.