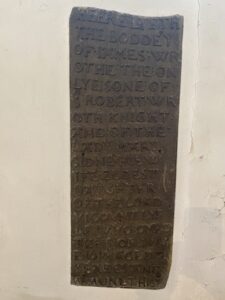 James Wrothe was the only son of Sir Robert and Mary Wrothe.

The Wrothes were local landowners who had farmed, lived, and prospered in Enfield since the 14th-century. Their family manor of Durantys, Durans or Durrants remained in the family for eleven generations, as did the vault attached to the manor, under what was once the family chapel in the South Aisle.

The memorial is actually a coffin plate which would have been removed from James’ coffin when, most probably due to works in the church, the coffins were moved and re-buried elsewhere.

The death of James Wrothe marked a significant turning point in the fortunes of the Wrothe family dynasty, so it is quite pertinent that it is his coffin plate which was removed and relocated for us to see.

James’s great-grandfather, Sir Thomas Wrothe, was a friend of Edward VI, a gentleman of the King’s bedchamber and a member of the Kings Council.

Thomas was also a great believer in enclosing land previously held in common for all, at great profit to himself. As we may expect, this did not go down well with the common folk who used to rely on the common land for their living. In the summer of 1549, during what is called ‘commotion time’, 20 armed Enfield men destroyed the fences, ditches, grass and hedges of Sir Thomas’ extensive enclosures of Enfield Chase. The men of Enfield were not quick to anger, having first sought a legal settlement.

None of this was new. There are records of locals making complaints against both Sir Thomas’s father, ‘Politician and ardent Protestant’ John Wrothe, and Thomas’ son (Sir Robert Worthe senior), who was the grandfather of our James Worthe.

John Wrothe, the locals asserted and not favourably, was ‘the greatest encloser of common fields in the parish’.

By the time of James’s father, also called Robert, we have additional disquiet over another act, stemming from the distant and unfamiliar but growing centre of London as an economic centre and the power bases of City and Court that resided within it; King James’ project to make the River Lee navigable for barges carrying produce to the capital’s growing and prosperous markets. As with such developments then and now, many would grow rich on this technological development, while others would lose out. The livelihood of those whose oyster beds and fisheries would be destroyed, and those who had previously transported corn and malt by road, were at serious risk. Many would be asked to forgo generations of family investment for the financial gain of others. The project also impacted the landowners either side of the river, who bore much of its cost.

It is likely that the latter reason prompted James’ grandfather, Robert Wrothe senior, to initially plot against the King’s project, albeit secretly and in a rather double-dealing manner. But it wasn’t long before the reality of Royal patronage and the power of Courtly connections prompted a rethink. By the time of James’ father, Robert Wrothe junior, the Wrothes had become ardent supporters of the new waterway. Indeed, by the time we get to James’ birth in 1614, the Wrothes were developing the river to facilitate the King’s hunting as part of their continued enclosure of common land for their profit.

Yet it is this aristocratic hospitality that hastened the downfall of the Wrothe family. The desire to expand further and buy a manor house in Loughton, not to mention the cost of keeping a household ready for the King to arrive at any time, meant that at the death of James’ father, just eleven days after James was christened, James and his mother found themselves in considerable debt.

To compound the issue, on James’ death just a few months later, the estate with all its lands and tithes reverted to the nearest male relative, one Sir Henry Wrothe. Mary lost her principal income. However, the income from the estate was not enough, as subsequently became clear when Sir Henry’s executors were forced to sell Durants out of the family 50 years later.

Any account of James Wrothe would be incomplete without further mention of his mother, Lady Mary Wrothe. The first English woman writer to publish an original work of prose fiction, Lady Worthe was also the subject of poems by the illustrious and contemporary poet, Ben Johnson. Being the first female writer of fiction predictably led her writing to be held in some contempt. This was heightened further by the suspicion, which she denied, that much of what she wrote was a thinly veiled account of the scandal and intrigue of the Court. This opposition was present to such an extent that Mary felt obliged to deny that she was the author. Irrespective of how she was received at the time, she is known today as a trail blazer for women authors.