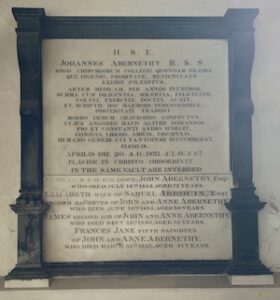 The monument to John Abernethy celebrates ‘…a president of the Royal College of Surgeons’, extolling, alongside the more common gentlemanly virtues of probity and benevolence, his ‘excellent intelligence’ and his ‘skill’ as a practitioner-educator within the developing profession of surgery.

The second son of a London merchant, Abernethy received a grammar school education before, by all accounts rather surprisingly, being apprenticed, aged 15, to one of the new breed of entrepreneurial surgeon-doctors who were seen to be making ‘a profitable business’ by engaging in ‘manipulatory’ practice, ‘absent of any investigation of the cause of either success or failure [of the treatment provided]’.

Abernethy, however, was more enamoured of the anatomical lectures of prominent surgeons at St Bartholomew’s Hospital who were just starting to break away from their reputation as ‘common’ barber-surgeons, to become a ‘learned’ profession in their own right.

The differences between the learned profession of university educated physicians and the ‘second tier’ apprenticed barber-surgeons, was rooted in earlier social differentiations and Abernethy’s epitaph is at pains to ensure the observer is clear that through his teaching and presidency of the prestigious Royal College of Surgeons, Abernathy was very firmly in the former, gentlemanly, camp.

John Abernethy’s transition from the ‘money making’ activities of his apprenticeship to the evidence-based practice promoted by the practitioner-educators in hospitals such as St Bart’s and the associations they birthed, demonstrates that the boundary between the two tiers was somewhat porous.

This said, it is possible, that it was precisely Abernethy’s less than illustrious beginnings that meant his progression from assistant surgeon to full hospital surgeon took much longer than one would expect, especially considering he was appointed assistant surgeon at a relatively young age. However, whatever his skill as a hospital surgeon, Abernathy’s fame came from his corresponding positions as surgeon-educator and practitioner of private practice. That Abernethy’s epitaph highlights the former, to the exclusion of the latter, says much about the continuities and differences between an 18th century understanding of the gentleman who engages in a profession, as depicted in other monuments within St Andrews to John Watts and Stephen Riou, and the 19th entury professional who had a much more complicated relationship with notions of gentlemanly status, as seen here.

The complexities of inhabiting a gentlemanly role in the 19th century is hinted at by the painted coat of arms in the small cartouche underneath the main monument. John Abernethy came from a family of renowned protestant clergy men, but had no family arms of his own. Instead, as was still a fairly common practice in his day, he designed his own. However, apart from an allusion to St Bart’s, in the black and white colouring and the diagonal stripe, its meaning is so opaque, as to leave the reader not with a sense of John’s nobility but, rather, of his pomposity.

This same tension existed in his medical practice, where he was known, simultaneously, as a progressive who advised his patients to first change their lifestyle and only put themselves under the surgeon’s knife as a last resort, and lampooned in the popular press as elitist for instructing patients how to live their life, in the style of an ‘amateur’ gentlemen physician, rather than use his scientific learning to address the issue directly.

The complexity here, is, in telling people how to live their life, John Abernethy was not drawing on a philosophical framework, such as Christianity or a humanistic education, as the gentleman physician of old, but on his own observations concerning the relationship between a patient’s diet and their health. In this approach, Abernathy was distinctly modern.

This complex mix, embodied by Abernethy, of being a learned professional in a traditional sense, with a cutting-edge approach to medicine, caused sufficient confusion that, when he died, Abernethy attracted obituaries from those whom hailed him as a medical genius and those that denounced him as an elitist irrelevance.