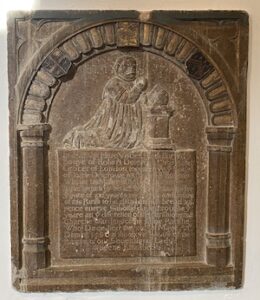 The inscription on the monument tells us that Robert Deicrowe was a citizen and merchant grocer of London.

Robert owned a fine house called ‘Ansycles’, located on the south side of Enfield Green.

Wear and tear over the years has resulted in other information recorded on the monument becoming so faded as to be now largely unintelligible. But we can make out that he died on 21 May 1586, aged 76. Born around 1510, he lived through a period of significant political, social, and religious change.

The inscription tells us that Robert’s mother was Joane Deicrowe who was buried alongside Robert in a nearby vault, along with Robert’s Master, Robert Wheeler.

Robert Wheeler was a Warden of the Worshipful Grocers Company at the time of Robert’s apprenticeship. To be apprenticed to such a powerful figure in the Company tells us that Robert Deicrowe’s birth family were likely to be rich, well connected or both.

It is unusual not to find reference to the deceased’s paternal lineage on a monument such as this. The emphasis is instead placed on Robert’s association with trade in the City of London. This emphasis is not only found in the naming of Robert’s Master, who would have been critical in providing Robert with the opportunities he enjoyed in the Company, but also in the style of clothing that depicts him as a wealthy merchant, as well as the heraldry on the arch, which depict the arms of both the City of London and the Worshipful Company of Grocers.

It was not unusual on monuments at this time to display the arms of the company to which the deceased belonged. But the fact that Robert’s Master is named, and not the paternal lineage, indicates a strong desire to claim social status through association with the City of London rather than through the family. This reflects a significant change in English society in which the pre-existing and strongly patriarchal class system was being disrupted by the purchasing power of the more successful merchants and the associated political influence of their merchant Guilds.

Robert’s wealth is further depicted in the form of the monument itself. Robert’s gown – originally in a rich, blue colour – and the prominence given to Robert’s instructions to distribute a penny loaf to twelve of Enfield’s poor every week for the twenty-one years following his death, are testimony to that.

This explicit and public announcement of charity was intended to be read alongside Robert’s depiction at prayer as confirmation of Robert’s protestant piety. This depiction of piety was then intended to be read together with the visual symbols of wealth and status as a powerful message of Deicrowe’s God-ordained social pre-eminence and gentility. This was not only an accomplishment previously denied those not from noble birth, but it also opened up a new world for his children and his children’s children.

Records tell us that Robert’s son Benjamin took full advantage of the family’s new social positioning, becoming Warden of the Worshipful Mercers Company on two occasions. He prospered even more than his father as a Merchant Adventurer and Freeman of both the Muscovy Company and the East India Company.

However, as much as money could now provide entry into a new world of status and opportunity, so it could all as easily be lost – which was the fate of Robert’s grandson, also called Benjamin. Through bad judgement, debt, and ill fortune, he lost all the family’s considerable property portfolio, leaving them destitute.