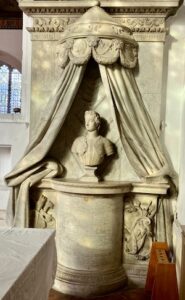 The monument to Thomas Stringer depicts him as a military man. The inscription tells us that he was a Colonel in the armies of William III. Other records tell us that Thomas joined the Dragoons in 1960 as a captain in the Earl of Darby’s regiment and that following this, he saw active service in every one of William III campaigns.

But the armour Thomas is portrayed in, the military paraphernalia at the feet of the column, and the overall style of the piece, does not depict Thomas as an early 18th century British solider. Instead, it depicts him in the style of a victorious Roman general.

This allusion to another world long past is also reflected in the monument’s inscription. The longest inscription of any monument in St Andrews Church, it ascribes to Thomas virtues that come straight out of the reimagining by the English upper-classes of the newly formed Kingdom of Great Britain as an idealised Greco-Roman civic state.

It was in looking back to these lost civilisations that the British ruling class believed they had finally found the answer to centuries of social and religious unrest.

Indeed, even the reference to William III would have had been heard as both an affirmation of Thomas’ virtues as a solider and a reference to the civic order that, in 1730 when the monument was commissioned, William’s reign was seen to have ushered in.

We are told that the monument was commissioned in accordance with the will of Catherine Countess of Westmorland, a distant relative of Thomas. Other records tell us that her second husband, the 6th Earl of Westmoreland, commissioned John Fane who, in turn, secured the services of the famous painter and architect William Kent and the Italian sculptor Giovanni Battista Guelfi.

Both Kent and Guelfi benefited from the patronage of Lord Burlington, England’s leading proponent of reforming British architecture, to better reflect Britain’s new age of virtue and order. This new fascination with long past civilisations went hand in hand with the ‘Grand Tour’ – the aristocratic tradition of visiting the ruins of ancient Greece and ancient Rome.

The monument reminds us that this exposure to past civilisations which Thomas experienced was considered essential for a life of civic duty. A civic duty that Thomas epitomised in joining both the army and Parliament. Thomas was MP for Clitheroe from 1698 until September 1706, when he was killed in action fighting in Flanders during the Spanish War of Succession.

Whilst several MPs held military ranks in the late 17th-century, Thomas was one of a minority who continued in active service. This was not without its complications however, and the logistical issues this created may well have been used against him by his opponents in the House. It is certainly true that having been granted his Commission by the then new Tory ministers, Thomas’ appearances as an attack dog for the opposition Whig party significantly reduced.

That Thomas was self-assured, bordering on belligerent, is seen by his behaviour in both the House – where he waved down his own bill because he didn’t like the person who seconded it – and the army – where the departure from his first regiment either led to, or was caused by, dualling with the regimental Colonel.

It can be difficult for the modern reader to square these accounts with the picture of virtue painted by the inscription on the monument. However, the outworking of virtues can shift with time and the attribution of generosity may simply have referenced the aristocratic requirement of Thomas’ day to ensure his house was always fully stocked and open to the visitations of others. The latter would certainly explain his heavily debited estates.

Whatever the truth of Thomas’ life, the fact that the monument exists tells us that he was understood as sufficiently representative of a particular eighteenth-century social outlook that a distant relative chose to erect it as the exemplar of all that she wished her family name to be associated with.