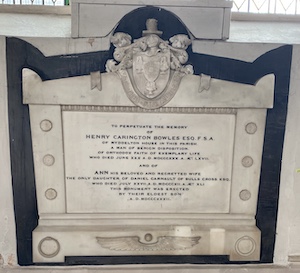 The monument to Henry Carrington-Bowles is a wall plaque designed in a style, common at the time, that mimics the form of a tomb chest, such as the one in St Andrews graveyard for Ann’ uncle, Samuel Garnault, but ‘seen end on’.

At the top of the monument are the Bowles coat of arms with the Garnault coat of arms positioned within it. In heraldic terms, this signifies that Ann (Garnault) was an heiress. Ann was the heiress of her late brother Daniel Garnault who had, after several successions in the family, inherited the Elizabethan Bowling Green House, from their Great Grandfather’s brother, Michael Garnault.

Ann died just three years after inheriting the house, but her husband Henry followed her late brothers plan to ‘…pull down Bowling-green-house, build a new residence on or near the spot, and give it the name of Myddelton-house, in honour of Sir Hugh Myddelton, knight and baronet, the original projector of the New River, from the circumstance of this river running through the grounds, and being himself a holder of shares in that concern, so eminently useful to the metropolis.’

Like Sir Hugh, the Garnault’ were a family of Goldsmiths and they developed a strong connection with the New River project. Both of Ann’s great uncles, Ayme and Michael, the sons of the Huguenot refugee Pierre Garnault, along with Ann’s uncle, Samuel Garnault, were treasurers of The New River Company. Henry Carrington-Bowels was, himself, the last governor of the company.

In the context of the Garnault’s faith, the epitaph’s statement that Henry Carrington-Bowles was ‘of orthodox faith’ and led an ‘exemplary life’, has a particular force. To be orthodox was to be part of the establishment that in 1830 was still suspicious of Christian non-conformists such as the Huguenots. To be orthodox and exemplary in this context, meant that the family ascribed to that foundation of middle class Victorian life, The Church of England. Specifically its 39 articles and the way of life laid out in The Book of Common Prayer. To be orthodox was to be railed against for not being ‘evangelical’ enough, by both the low and high factions within the Church of England and lampooned in the press for double standards in the maintenance of the status quo, especially that which favoured the ‘decedent’ ruling class.

But to be orthodox was, non-the-less, to align oneself with the established order. An alignment that was essential for obtaining a position anywhere within the social, cultural and political fabric of 19th century Victorian England and, therefore, a key signifier of social status.

The combination of the monument’s heraldry clearly communicating Ann’s status as an heiress – emphasised by the epitaph only alluding to Ann’ family lineage – and the proclamation of the families orthodox credentials, speaks of a family concerned with its social standing and inheritance much like the earlier city merchants memorialised in some of St Andrews’ 17th century monuments.

Unlike the earlier monuments of the 17th century however, monuments in the 19th century were not a tool to support the legality of an inheritance. None-the-less, Ann and Henry’s eldest son, Henry Carrington-Bowles (junior), who we are told commissioned the monument, was sufficiently concerned with the validity of his families inheritance, to utilise the monument to his mother and father as a tool to communicate this.

We know that Henry Carrington-Bowles (senior) ensured Myddelton House was entailed to the male Bowles line, which was a legal device, feudal in origin, to ensure that the family estate was left to the eldest son and not broken up among other siblings and married out of the direct family. The continued use of entailment in Victorian times, as here, indicates that the ownership of an estate continued to be seen as a source of income and status for the nobility, albeit within a more complex hierarchy that now included a wealthy middle classes and more porous boundaries between all of the different levels of social class.

In this context, we can understand the monument as part of the Carrington-Bowles’ desire to leverage the wealth of both families, in order to transcend the Bowles Huguenot past and their respective merchant statuses as goldsmiths and well known successful publishers, to obtain recognition within an even higher level of aristocratic nobility.