There is still some more information to gather for this page. Thank you for your patience as we draw this together.

The organ was built at a cost of £500 by Richard Bridges who, it is believed, was trained in the factory of the renowned Renatus Harris. Though put in hand in 1752, it appears not to have been completed until the following year. In the Daily Advertiser 25 October 1753, we read, “We hear that the new organ made by Mr Bridge for Enfield church is to be opened on Sunday next with an anthem.”

The organ was rebuilt and enlarged by Gray and Davidson and comprised 3 manuals with seven stops on the Great, 8 on the Swell, 5 on the Choir, one Pedal Stop and five Couplers.

Gray and Davidson removed the organ from the West gallery and placed it in the South Chapel. The old case, probably due to height, was not used in the rebuild. This was preserved and erected against the West Wall. But in order to accommodate new, tiered seating, it suffered some mutilation in that about 18 inches forming the base or plinth below the panelling was removed. This no doubt was to maintain the original height, as it now rested on a teir some 18 inches higher then its former position.

William Hill again removed the organ, rebuilding it in a special loft in the North Chancel aisle, the old Turret giving access. This was virtually a new organ with pneumatic (supply) action. Little remained of the old Bridge organ. It was given in memory of Joseph and Emma Mary Withers by their 3 grandchildren.

Acoustically, this last position was unfortunate, for the organ reached well up to the Ridge roof of the aisle and the sound was largely absorbed so that tones reaching the Nave were subdued.

The organ was rebuilt by Kingsgate Davidson in its original position. This was done in memory of Rev Geoffrey William Daisley, Vicar of Enfield 1928-1939. He was a lover of music and had dreamt of such a scheme.

The scheme as first drawn up provided for an enclosed section to the Choir Organ but lack of space precluded this. Later, a small chancel organ was built within one of the arches.

A new organ was installed, which is currently in use 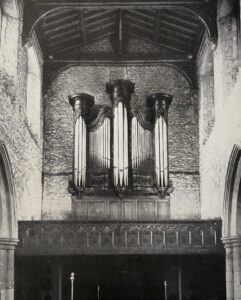 Specification of Chancel Organ (prepared for 1952)