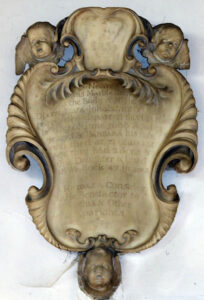 We know little of Henry Dixon’s birth family. We do know that Henry made his money in the City of London as an upholsterer and died a wealthy man.

The elegance of the monument, which has been described as one of the finest cartouche monuments of its period, speaks of this wealth, as does the highlighting of his charitable works.

To a modern reader, the inscription could sound somewhat understated. But combined with the fine sculpting of the whole, and the prominence of cherub motifs which would only just been coming back into fashion, there is a certain self-confidence, even a superiority, about the piece.

This presentation of Henry may well have been helped by the fact that he wouldn’t have been known in the area until he retired there after having made his money. But it would have been known that Henry had made his fortune through trade. There was clearly no embarrassment in him appropriating the signifiers of gentility, such that others would assign to him the associated traits of good character, right standing and social position.

This said, what stands out when we dig a bit deeper into Henry’s giving is the scale and focus of his charity. Rather than leaving his estates to his children, as had been the custom for centuries before him, we know from his will that Henry ‘…left all his estates in the parishes of Benington and Munden in Hertfordshire, Enfield in Middlesex, and St. Mildred in the Poultry, London, to the Drapers’ Company, for the purpose of apprenticing poor boys above the age of fifteen.’

This does not mean that Henry left his own family destitute. We know that, in 1663, his son, also called Henry, was already a member of the Draper’s Company and renting out property obtained through his wife’s inheritance in St Pancras. This would suggest that Henry junior was likely to be a wealthy man in his own right by the time of his father’s death in 1696.

However, this does not take away from the fact that, rather than cement his family’s newly acquired wealth and status even further, Henry senior chose to leave the larger portion of his wealth to the education and social advancement of others. It is tempting to think that this may have reflected Henry’s awareness of his own good fortune in his journey from a family of whom we have no records to a member of the gentry residing in opulent surroundings within the boundaries of Enfield.

This assertion that Henry’s charitable giving was more than simply performative, whether as a gentleman or as a Christian, is further supported by the nature of Henry’s bequest.

The apprenticing of poor children was not uncommon in the 1600’s. Indeed, it was seen as the principle means by which society could address the fear of children roaming about, forming gangs, and terrorizing the populace, especially in the growing towns.

It is in this context that we can understand Henry Dixon’s request to provide the means for poor boys to be apprenticed into a highly prestigious Worshipful Company, to a Master of note, and to be given money on completion of the apprenticeship. We remember Henry Dixon as an enlightened man who genuinely cared about ensuring an apprenticeship delivered on its promise of the same good fortune and social mobility that he had experienced for himself.