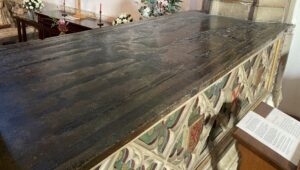 We are told that the figure on the brass is “…the lady Jocosa formerly daughter and co-heiress of the most honourable Lady March and wife to the most famous soldier John Tiptoft; who died 22 september A.D.1446”.

Lady Jocosa’s claim to the Holland family name came via her mother Eleanor Holland, Countess of March, eldest daughter of the 2nd Earl of Kent. The 2nd Earl of Kent’s four sons all died without legitimate heirs, so the sisters and their children, including Lady Jocosa, became co-heiresses of the vast Holland estates.

Eleanor Holland became great grandmother, through her first marriage, to Edward IV and Richard III. Both kings were central figures in the Yorkist fight for the English crown during the War of the Roses; a war that would dominate the fortunes of Jocosa’s descendants as captured in the arch above the tomb.

Powys was an important, if small, Welsh border principality and Jocosa’s family were Marcher Lords with lands and castles. Marcher Lords owed their position to the English monarchy, who first appointed their forefathers to control the region for the crown. Indeed, both Jocosa’s father (the fifth Baron Powys) and her husband (Sir John Tiptoft) were notable English soldiers who gained much acclaim fighting in the contested English border lands.

In contrast to the nobility of Jocosa’s lineage, John Tiptoft came from much more humble origins in Cambridgeshire. It was Sir John’s military exploits that initially won him the prestige and wealth that enabled him to marry such a worthy bride as the double co-heiress Lady Jocosa.

The presence of such acclaimed nobility in Enfield was the result of Sir John’s unexpected and unforeseen inheritance of Elysng Hall on the death of his cousin Elizabeth Wrothe in 1413.

The positioning of Lady Jocosa as a wife is typical of the age and, indeed, the positioning of women in relation to their male relatives will remain the norm for centuries to come. It is less usual to see Jocosa positioned firstly as the daughter of her mother. But if we consider that co-heiress means the inheritance of land and prestige and, the greater status of the Hollands in relation to the Powys, we see that, in memorialising, we make choices that speak of the past, the present and into the future. Monuments memorialise those who have died but, in doing so, they construct a collective memory that projects the social, political and familiar position of that person into the future.

The inscription, display and heraldry on Jocosa’s tomb works together to establish the most favourable account of the past to provide her descendants with the greatest security for their future, while simultaneously prompting the passer-by to pray for the quick passing of her soul through purgatory into heaven.

Interestingly, Lady Jocosa is a great-grandmother, several time removed, of George Washington (President of the United States), Lee Marvin (actor and singer) and Kit Harrington (actor in ‘Game of Thrones’).