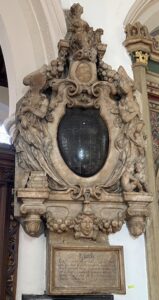 The monument to Martha Palmere encapsulates the ‘emotional turn’ of the 17th-century which went along with a new concept of family as closed and intimate and, within which, a woman’s role became fixed in the dual concepts of ‘wife’ and ‘mother’.

This shift occurred alongside a developing interest in the potential of children to perpetuate and establish their family’s particular worldview – whether this was a particular strand of Protestant religion or the values of English society as a whole. This focus contrasted with earlier ideas of children as without character until they became functional as mini-adults and produced a new and urgent concern about what kind of future a child would have.

This new concern for children was not, therefore, an expression of care in the way we might recognise today. That would not start to emerge in English society for another century or so. This concern expressed itself in the more functional task of instructing children in right living. This contrasted with the related focus on women as child-bearers which, understood as a function of marriage, was more concerned with the emotional tie between husband and wife.

This emotional tie between husband and wife is seen in the epitaph’s expressive adoration of Martha if, as would be reasonable, we assume that this was commissioned and ‘signed off’ by Martha’s husband James. What this monument exemplifies is the way in which the role of a woman as wife and child-bearer – expressed clearly in the line: ‘…wife to James Palmere; whom God blessed with as many children as he did years of marriage’ – was caught up in notions of Christian virtue. This connection is perhaps most clearly seen in the line: ‘…in bringing forth a child for Heaven, she went herself a saint to Heaven.’

But it is the additional wording in the piece labelled ‘Epitaph’ which, read in the context of the whole, gives this connection its fullest expression. Here, Martha’s life as a wife and mother is likened to the most sacred of Christian sacraments – the Communion Table. If this was not enough, the monuments decoration double downs on this theme by representing the three theological virtues: Hope, the cherub holding an anchor at the top; Charity, the cherub with children at her feet on the right; and Faith, the cherub on the left holding a cross. The inclusion of the books under Faith also introduces the cardinal virtue of wisdom. The inclusion of wisdom may well point to Martha’s motherly role as her children’s teacher. The remaining three cardinal virtues not chosen are fortitude, temperance, and justice.

The monument itself is noteworthy as the work of an important English sculptor, Nicholas Stone. Nicholas was a sculptor, mason, and architect who trained in both London and Amsterdam under the famous Dutch sculptor, Hendrick de Keyser, who later became his father-in-law.

Nicholas has work in Westminster Abbey and is known for sculpting the first English example of a figure in Roman armour. He is also known for his work as master mason for Inigo Jones’ Banqueting Hall in Whitehall and as Master Mason to the Crown.

Because Nicholas kept a record of his commissions, we know that he considered the Martha’s monument to be ‘…a letell monement’ and that it was indeed commissioned by ‘…Mr James Palmor for his wif’. Furthermore, we know that it cost James ‘£16.0.0.’ – in today’s money, just over £3,800. This in itself testifies to James Palmere’s, wealth.

We know that he had a notable career at Court as servant – or, chief friend – to Sir Phillip Herbert, 4th Earl of Pembrooke and 1st Earl of Montgomery. Earl Phillip was granted the keepership of Elsyng Hall by King James 1st in 1612 before buying it from King Charles 1st in 1641 and it was as part of his entourage that the Palmeres also lived at Elysing hall.

James, later Sir James Palmere MP, also had his own income from his appointments at Court, estates in Wales and, seven years after Martha’s death, from the purchase of Dorney Court in Buckinghamshire from his late wife’s family.