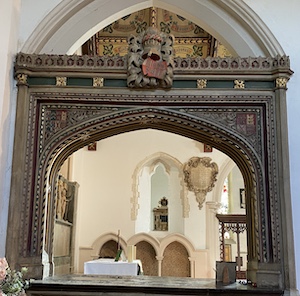 The story of the Ros (or Roos) monument is captured in its placement on top of the Tiptoft tomb and the marshaling of specific coat of arms on the three shields.

The shield on the right-hand side as we face the arch represents the marriage between the 9th Baron de-Ros, Thomas Lord Ros, and Phillipa Tiptoft, Jocosa’s eldest daughter. While the Tiptoft title and its lands initially passed to Jocosa’ eldest son John Tiptoft and then to his sons, by the time the arch was built in 1530 the inheritance had passed into abeyance and that part of the Titpoft estate relevant to Enfield and to this monument, Elsyng Manor, had been inherited by Philippa and, through her, by her descendants.

That this was not straightforward is first hinted at by the inclusion of the three lions of the Holland family instead of the single lion rampant of the Powys. Both the Powys and the Holland name were claimed by Lady Jocosa and through her, by her descendants. But it was the Powys coat of arms that John Tiptoft junior marshalled with the Tiptoft cross on his coat of arms. The switch here could reflect the Holland’s greater importance in 1530. But it also subtly separates Phillipa from her brother, who was executed by Henry VII for his leading role, as Lord High Constable for the Yorkist Edward IV, in the bloody execution of Lancastrian nobles. Indeed, John Tiptoft was Lord High Constable when his Lancastrian brother-in-law, Thomas Lord Ros, was executed following defeat at the Battle of Hexham.

The choice to include the Baddlesmere coat of arms on all the shields speaks more directly to the Ros’ claim on Elysng Manor. Margeret Payn, nee Baddlesmere, was the common maternal ancestor of John Tiptoft senior and Elizabeth Wrothe, from whom John Tiptoft inherited Elysng Manor. This claim is further emphasized on the left-hand shield which impels the marshaled arms on the right- hand shield with the arms of the Lovell family. This represents the marriage between Sir Thomas Manners, 12th Baron de-Ros and 1st Earl of Rutland, and Elizabeth Lovell. But it is Elizabeth’s uncle Sir Thomas Lovell who is in view here. Thomas Lovell was one of Henry VII small circle of highly powerful advisors who, in 1492, sponsored an Act of Parliament which declared the newly reinstated only surviving son of Philippa Tiptoft, Edmund the 10th Baron de-Ros, as ‘not of sufficient discretion to guide himself and his livelihood’, before granting Sir Lovell custodianship of all the Ros’ estates.

On Edmund’s death in 1508, the title of Baron de Ros passed to George Manners, the eldest son of Philippa’ eldest daughter Eleanor and Sir Robert Manners. The exact legal status of the Ros’ estates, which alongside Elsyng House included Helmsley and Bevoir Castles, becomes opaque. Whilst George Manners and his son Thomas – he of the marriage to Elizabeth Lovell – would continue to be dependant on Sir Lovell’s favour, it seems that specific obligations were slowly rescinded over their lifetimes. The exception was the much-improved Elsyng ‘Palace’, the home of Sir Thomas until his death in 1524 when, in another twist, he left it to his now nephew and wife’s heir, Sir Thomas Manners. Thomas Lovell married Jocosa Tiptoft’s youngest daughter Isabel but had no children.

The presence of the arch suggests, however, that Sir Thomas was not secure in this inheritance.

Elizabeth Lovell died two years after her marriage to Sir Thomas Manners and they also didn’t have any children. Sir Thomas’ heirs came from his second marriage and, therefore, this is the marriage we would expect to be referenced on any shield associated with him. Indeed, Sir Thomas’ official coat of arms does not reference the Lovells. However, on the arch above Jocosa’s tomb, the Lovell coat of arms is placed on the side of the shield where we would expect the husband’s coat of arms to be placed, thereby granting it an unusual significance. The inclusion of the Lovell family coat of arms in this fashion, alongside the other aspects discussed above, strongly suggests a desire to smooth out a bloody and complex family history in favor of Sir Thomas Manners present claim to Thomas Lovell’s Tudor palace. This is especially the case when we consider that the sale of this estate to King Henry VIII significantly enriched the Manner family and enabled the repair of their principal residence, Belvoir castle.