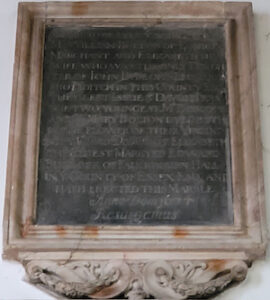 The inscription on the monument tells us that it was commissioned by Elizabeth Bullock, the eldest daughter of William Bolton, and his wife Elizabeth, who is also mentioned in the inscription along with their two other daughters, Dorothy and Mary.

The inscription tells us that Dorothy and Mary both died in 1665. The date and closeness of their deaths suggests they were both victims of the Great Plague. The poetic allusion to the ‘flow’er of their Virginenity’ suggests they died relatively young and unmarried. Other records support this, indicating they were in the twenties when they died.

We also need to go to other records to learn that William Bolton died in 1651. Whilst we don’t know when his wife Elizabeth died, it was probably before 1665 and certainly before 1674 when the monument was erected, two years before the death of Elizabeth Bullock in 1676.

While the monument follows tradition by framing Elizabeth in terms of her husband, it also hints at the contrasting role Elizabeth played in her husband’s fortunes as a wealthy heiress in her own right.

Elizabeth was one of several advantageous unions that supported the growth of the Bullock family throughout the 17th– and 18th-centuries. Elizabeth’s grandfather was from a modest background. But having made some money in the City, had obtained Ullenhall Manor in county Warwick after it had been offered as collateral for a loan he provided the original owners – and on which they had defaulted. Elizabeth inherited a third of the property on her father’s death and was therefore already a wealthy heiress when she married Edward in 1661.

But she would became even wealthier when she inherited Ullenhall in full on the death of her sisters.

The plainness of the monument suggests they were a pious family. Or, rather, that those who commissioned the monument were pious or, wanted to project the family as pious.

The Bullock family were strongly Royalist and had, in the previous generation, suffered much at the hands of Parliament. However, it is possible that by the 1670s, the Royalist Bullocks had become influenced by pious Anglican thinkers, such as John Ray, who were active in Essex at the time or, indeed, that Elizabeth was making a statement of her own. Either way, the monument provides us with a unique opportunity to hear the voice of a woman at a time when women had few opportunities to express themselves either privately or publicly.